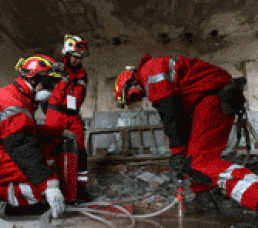 USAR-teams are composed by members of the Civil Protection and the fire departments who were specifically trained for this. They have to follow the INSARAG External Classification procedure (IEC) of the United Nations to be internationally recognized. When a USAR team is needed abroad, Belgium sends it in the form of a B-FAST team (Belgian First Aid and Support). This Belgian assistance abroad is almost always coordinated on the European and/or UN level.

USAR teams are composed by specialized members of the Civil Protection and the fire departments, completed with specifically trained medical personnel. These people are trained to fully autonomously save human lives in difficult circumstances (tropical heat, chaos, …) during ten days 24h/24, in shifts of 12h. The Belgian B-FAST USAR team meets the standards of the United Nations and obtained in 2010, after a thorough audit, the quality label INSARAG-certified as Medium USAR team.

In 2010, Belgium for instance sent a USAR team to the Haitian capital Port-au-Prince after the heavy earthquake . They were part of the Belgian B-FAST team. During one week they searched for survivors under the rubble. In the end, they succeeded to rescue three persons alive from the rubble.

When a USAR team is needed abroad, Belgium sends it in the form of a B-FAST team (Belgian First Aid and Support). This Belgian assistance abroad is coordinated through the Emergency Response & Coordination Centre (ERCC) of the European Commission.

A USAR team needs to be able to be mobilized and deployed in a very short time, as every hour counts when rescuing victims buried under the rubble. Therefore, the DGCS disposes of an effective database that sends specific text messages to the USAR members in case of an assistance request. The members are selected on the basis of their training, need to be in order with vaccinations, service passports, and other parameters.